The Complete Guide to Joysticks

The Complete Guide to Joysticks

In this month’s complete guide to joysticks, we are going to be discussing different types of joysticks, their history, how they work, what they are used for and their benefits.

The first confirmed use of such a device was in 1908 by the French aviation pioneer Louis Bleriot in his Bleriot VIII experimental aircraft. The device used by Louis Bleriot was purely mechanical. The first joystick as we know it today was invented at the U.S. Naval Research Laboratory by C. B. Mirick and patented in 1926. It was a two-axis electronic joystick and was originally designed for remotely piloting aircraft.

Joystick technology continued to develop gradually throughout the 50’s, 60’s and 70’s and was used in NASA’s Apollo programme, most notably in the Apollo lunar lander test models. However, their use changed dramatically in the early 1980’s when home gaming machine popularity was increasing, the first joystick-controlled gaming controller was for the Atari 5200 in 1982.

The idea of using joysticks for gaming began to gain traction with the first thumb style joystick being used in 1988 with the release of the NES MAX. The NES MAX showed how useable and intuitive joysticks could be in gaming, but it was not until the release of Sony’s PlayStation Analog joystick in 1996 that the gaming joystick really took off due to its ability to work so well within a 3D world.

Outside of gaming, the joystick found its home not only in aviation applications but also in controlling machines such as UAV’s and sub-sea remotely operated vehicles (ROV’s), construction equipment, off-road vehicles, surveillance cameras, wheelchairs, and multiple military applications.

Industrial joysticks are widely used to control, steer, and position a wide range of heavy-duty equipment, machines, and systems such as agricultural machinery, cranes, oil rigs, forklifts, excavators, military equipment, and others. There are different types of industrial joysticks including small precision joysticks like the thumb joystick and finger joystick up to fully customised hand grips. The different types feature different actuator options, mounting styles, and controller specifications like number of axes, spring return, friction hold, and different protocol support. Industrial joysticks are also extremely robust and can withstand harsher environments. Live Electronics work with Ruffy Controls and Ultra MSI who both manufacture a wide range of high-quality industrial joysticks designed for various applications which we will discuss further throughout this blog. 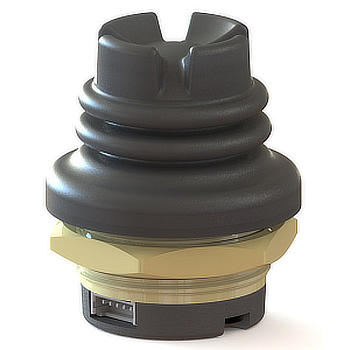 Thumb controllers are low-profile based joysticks that provide precise control with a variety of mounting and actuator options for ease of integration. Ultra MSI manufacture the 462 series and Ruffy Controls manufacture the TS1 series that are both perfect joysticks for applications such as Cursor Control, Target Acquisition, Security Cameras, Robotics and Automated Surgical Equipment. 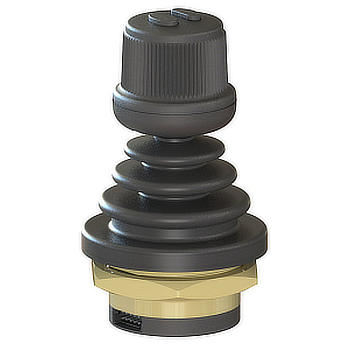 Finger joysticks are mainly used to provide control of movement and speed in low-profile units such as wheelchairs, medical instruments, robotic operations, and applications where precision and compact size are needed and the HE1 series from Ruffy Controls is just that, offering high precision within a compact panel mounted design. 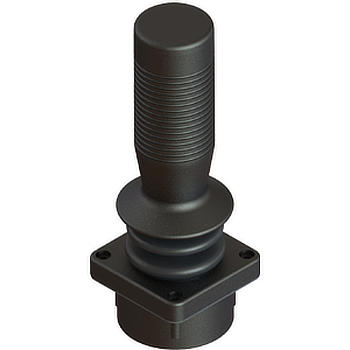 Hand grip joysticks are widely used in heavy-duty applications such as mobile cranes, forklift vehicles, construction machinery, robotic machines, and agricultural equipment. Thanks to their sophisticated wear-free hall effect sensors and control mechanisms, these types of joysticks are highly versatile in multiple applications as is the SG series from Ruffy Controls which is a hall effect hand grip joystick with a redundant sensor, providing an extra level of safety making it the perfect choice for applications such as Remotely Operated Equipment and Automation Systems.

How do joysticks work?

A joystick is an input device consisting of a stick that pivots on a base and reports its angle and direction to the device it is controlling. It detects the direction of the stick by use of an electronic switch, Hall Effect, strain gauge or potentiometers.

What is a joystick?

A joystick is an input device which transforms mechanical movement from an operator and turns this into an electrical output and can control a computer game or machinery.

What are the types of joysticks?

There are several types of joysticks that most of us may be familiar with as they are used on game consoles and gaming computers, but the industrial joystick types are, thumb joysticks, finger Joysticks and handgrip joysticks.

What are joysticks used for?

What is a hall effect joystick?

A hall effect joystick works in the same way to any other joystick but utilises the Hall Effect principle which allows the joystick to have a very long mechanical life due to there being no physical contact with the sensor and they can be designed to withstand excessive shock and vibration.

How does a potentiometer work?

In a joystick, a potentiometer is connected to each axis shafts so that pivoting the shaft rotates the contact arm. When the stick is moved there is a corresponding resistance change within the potentiometer. This adjusts the voltage, which can be interpreted by a computer programme as movement.

What is a strain gauge used for?

A strain gauge’s primary use is to measure force or strain. The resistance of a strain gauge changes when force is applied, and this change will give a different electrical output.

Latest from the blog